Kestrel made it worth the effort

I was awake early this morning, so as soon as the sun lit the bedroom up I decided to make the effort and head off for a walk around the patch, (even before breakfast !!). I parked the car on the edge of the industrial estate and headed on to Thacka beck reserve, the time would be 5-45. I had just started along the path when I met birder John (I call him birder John to distinguish him from other Johns I have in my phone book). Anyway we stood chatting for a while as you do and swapping notes, John has been telling me about a survey he is doing on the gulls that are breeding on the factory roofs (just for his own interest at the moment) Nests number into the late twenties with Lesser Black-backed Gull being the prominent nester.
After a few mins. we parted company and I headed onto the reserve, I hadn't gone very far when my phone rang, it was John, "I forgot to mention" says He  "there is a Kestrel sitting on a post on your right as you head for the railway", and sure enough there was. The only trouble was the sun was against me and I had to pass the bird to get in the right position for pics. Fortunately I managed to do so without disturbing it and got a few pics

Just above the Kestrel was these 3 mates chilling out and having an early morning groom.

Next a walk along the Hawthorns didn't produce a great deal, but it was nice to see this


and this
Both enjoying the early morning sun.
We have also got the Longhorn cattle back on the patch, all part of the Eco management.

There is an abundance of wild flowers out at the moment, and this one typifies Summer for me, 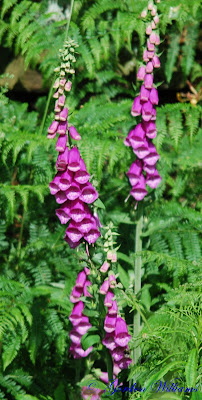 Near the area where I had parked the car there are a good number of the gulls mentioned earlier, so decided to get some pics of them.
Now I don't know whether the gulls thought the lens was a gun, or maybe it was just the fact that a lot of the nests have young, but as soon as I pointed the lens to the sky I started being attacked.

Well tied to the house again because of the weather so it will be another day of floor tiling. Yesterday it never stopped, and it looks like another day of it, its coming down like stair rods as I type.
However I do have some pics of Tuesdays outing and Wednesday, although most of Wednesday was spent painting the staircase and then the Olympic torch came through. Wednesday was a cracking day lots of sun and I would much sooner have been out birding than painting, but as its an outside iron staircase well it can only be done in good weather.
So Tuesday out in the Northern Pennines having a drive round and found a Lapwing chick only a couple of days old , running around on the side of the road. its an area where there is a steep bank from a hay field and when the chicks get too close to the bank they fall onto the road. Anyway I caught it and put it back in  the field and the parent bird came in to look after it . We travelled the same stretch of road last year and it was littered with dead chicks, then predators come to feed on them and they get killed.
Further on and we came across these Red Grouse.

Well its still persisting out there so its back to the tiling, God knows when I'll be able to get out for more pics, hopefully it won't be too long.
Posted by Gordon at 11:38 No comments:

The torch comes to Penrith 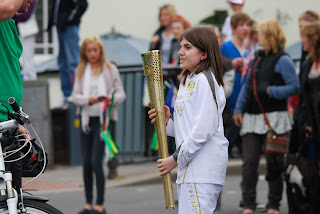 The crowds started to pile into Penrith at about 3-30pm, at which point the Olympic torch was still a long way from Penrith. but eventually 5 o-clock arrived and the torch bearer came into view in our part of the town to hand the flame over to this little girl. 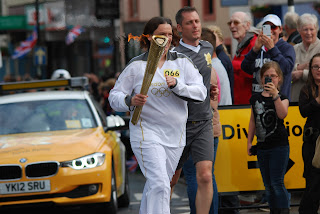 unfortunately at the shutter went off her arm came up and covered her face.

Well the lads have discussed the various aspects of the Kite that was seen over our patch (Thacka) and have come to the conclusion that it was a Red Kite, which has now been added to the patch list, the first new comer for a while but  very  welcome.
For a few years now  Red Kites have been seen drifting into Cumbria mainly from Dumfries & Galloway, where they have had a very successful introduction scheme and from there its just a short flight across the Solway into Cumbria. Also they have started the same scheme in South Lakeland at Grizedale Forest, and the last batch is to be realest this year. So it won't be long before there is a permanent breading population across the whole of Cumbria, and possibly spilling over into Lancashire, fantastic.
This last few days I have just been pottering about locally and keeping an eye open when out and about with the Westies. The other morning was great as regards the weather, which made a change as its been very changeable of late with a fair amount of rain. So we made our way up to Cowraik, the one good thing about this place, it does have a tendency to stay dryer and better under foot if we have had rain. As we entered the wood Blackcap could be heard but not seen, also Great Spotted Woodpecker and Jays were calling. Then on the edge of the wood I heard a soft agitated call coming from the tree line, so I backed off a bit and waited to see if anything showed. I was just about to give up when this little beauty flew out and perched on last years dead  Willow Herb storks-------


And just for a change we will give the Westies a bit of blog space.

Keep looking in you may see us again sometime, all the best.
Posted by Gordon at 16:08 No comments:

Well been back from Mull a few weeks now, and Penrith doesn't quite produce the same class of goods :-(o. Yes I know its summer now (though you wouldn't think it, rain, wind, flooding in various parts of the country and low temperatures) . and things generally quieten down a bit during this period in the UK, but I bet it doesn't go that quiet on Mull.
So with not a great deal happening on the patch and outlying area ( although did get a text from Birder John this morning saying a Kite Sp had flown over Thacka reserve, and I reminded him that a Black Kite has been wandering around Cumbria on and off for the last 3 or 4 weeks) I have been heading out of the county.
The following pics are from 2 visits to Leighton Moss one with Mrs W and once on my own. when my wife and I went down the weather was still holding good,  and the Marsh Harriers were showing well.


A week later A Spoonbill turned up, having missed the one on the Solway I decided to go down for a second visit in the hope of adding this to my year list. (and no this can't be classed as a twitch, as I don't twitch honest ;-)), ) This time I was more fortunate although as can be seen from the first pic it was a good distance away.