Before we get to the Mull bit,this afternoon I did something I very rarely do and that is twitch or try to twitch a bird. A European Bee-eater had been reported near Workington an hours drive from home, too good to miss I thought. Unfortunately I did, miss it that is, or I think the term is I dipped it, which makes me kinda think I'm no good at the twitching game.
Back to Mull, in the previous post one can see a distant shot of White-tailed Eagle taken while waiting for the boat to Staffa and the Treshnish Isles. So this post is a little of what we saw on that trip, and to start off with 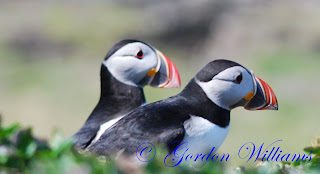 And now something more pleasing to the eye---- Puffins, sometimes referred to as the clowns of the bird world,  poor things.

Just a few to wet your appetite more on the way.
Posted by Gordon at 21:52 No comments:

A bit more from Mull

The first evening on Mull, we had settled into Deerside our self catering for the week and after a meal we went for our first ride out.
The weather was quite good, a lovely evening but at this stage we didn't know how good it was going to get. I  couldn't believe it when not far out of Tobermory we encountered this little beauty.


We continued on our way and it wasn't long before Mrs W shouted stop, at this stage we were along the coast, what have you seen ? says I , well its far out but its black with white wing patches. I vaulted out the car grabbed the camera off the back seat to get a distant shot of this--- 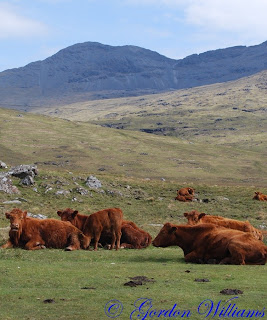 And it wouldn't be Scotland without a few Highland cattle.
All for now, but more to come.
Posted by Gordon at 15:42 5 comments:

Drove up to Mull on Saturday arriving at Deerside our self catering in Tobermory at 3pm . After a bit of a walk round the town and then a bite to eat we decided to go for a short drive, the sun was out so didn't want to wast it. We took the road to Dervaig and hadn't been going long when we came across our first Short eared Owls, 5 in all. Unfortunately I was using an SDHC card and the laptop won't accept it, so have had to revert to an old SD card.
So no owl pics yet, but here is a few to be going on with.

This laptop is cronick and slow I'll try and persevere, but that it for now.
Posted by Gordon at 22:05 2 comments:

I had a short visit over to the Isthmus today just to catch up on the nest situation, with no improvement in the weather I wasn't expecting much activity. It was a nice surprise to look up at the Nuthatch nest hole to find them feeding young.

The Chaffinches were still hanging around but there didn't seem to be any nest activity,

So I grabbed a ladder and had a look at the nest, it was empty, and no sign of any young having been in it, so I presume the eggs had been predated.

And here is another pic from the other day at Hodbarrow

Terns save the day

Set out early this morning heading for South Cumbria hoping for the Long-billed Dowitcher which is a visitor from America and has been showing well for about 4 days. Traffic was light and I made good time pulling in at the Hodbarrow RSPB reserve just over an hour after setting out.
The sun was shinning as I got out of the car but the wind felt as if it was trying to cut me in two, this is May and the temps are still well down in the North. I plodded over to the hide and thankfully at this point there was nobody inside, as the wind ripped the door out of my grasp and made an almighty bang. This is the initial view you get when you first enter the hide-------

the above pic is highly zoomed and then cropped, to show a few Common Tern and two Little Terns.
As I made my way to the hide I met 2 people coming from it and I enquired about the Dowitcher but my heart sank when the reply was no sign. More people entered the hide and we all gave the area a good grilling but to no avail. It was either hunkered down somewhere out of the wind, or more likely moved on.
Still I was fairly upbeat as the Terns gave me 2 more year ticks so I left the hide and made my way over to the sand dunes, where I found this little beauty---- 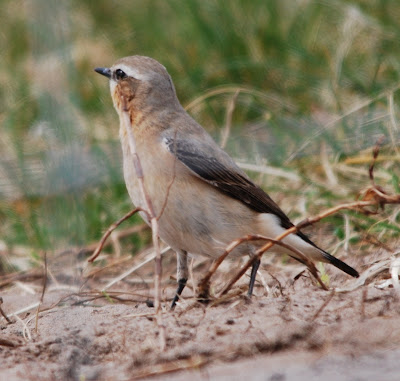 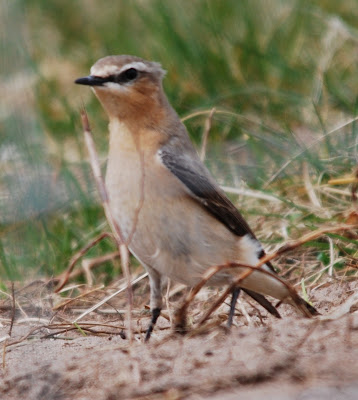 There was also a few Linnets about but they were quite camera shy.
Posted by Gordon at 18:54 No comments:

Well the weather here in Cumbria is pretty dismal and not conducive to going out, but still can't avoid getting wet. Firstly had to take the car in to the garage for its MOT and walk back home , that was the first soaking. then out with the Westies, second soaking, and this will have doubled by the end of the day.
So I decided to post on yesterdays activities. I went for a ride round in the car stopping off continuously to scan the topography in the hope of finding another year list tic, however this wasn't to be.
I set off along the A66 heading for Brough then chucking a left and up into Teesdale, the sun was shinning and when I had gained some height it was just great listening to the bird song. Curlews where the predominant bird as regards song. The call of the Curlew  and the Great Northern Diver in Scotland are the 2 birds that represent the true "call of the wild" it can make the hairs stand up on the back of your neck.
I couldn't resist this handsome Pied Wagtail as he perched on a lime-stone wall.

There was also an abundance of Lapwings and I managed to capture this one having a tug-of-war with an earth worm.

Just before I left the county of Durham and back into Cumbria I came across this Red Grouse with attitude.


Their call really puts a smile on my face.
Posted by Gordon at 13:08 2 comments:

A bit of a disappointing weekend of wandering really, It started off Saturday when I made my way up to the Solway estuary and RSPB Campfield Marsh. There had been reports of  a Spoonbill on the salt marsh pool, and I had seen some good photos that one lucky person had taken. It had been seen at 7-30 Saturday morning, I was up there by 8-30 and not a sign. I scanned all the estuary from the pool area nothing, no Spoonbill, not even a knif&fork bill, nothing. 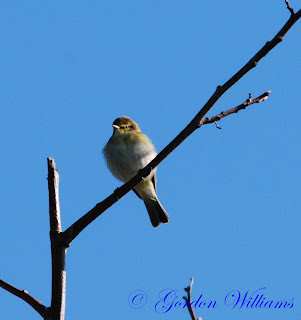 I decided to have a walk along the track from North plain farm up to the hide, a bit of a trek in itself, but the sun was shinning and fairly warm when out of the wind. On the trek up I got another year tic in the form of Sedge Warbler, there was quite a few singing with an occasional appearance but not long enough for a pic. The Willow Warbler above on the other hand was quite happy to perch out in the sun and sing his little head off.
I was carrying all my gear with me so was a little disgruntled on arriving at the hide to find no Spoonbill, just a few Black-headed Gulls which look to be nesting there, they seem to be getting everywhere these days. So I slogged it back to the car, as I was doing so a few Shelduck flew across the track and landed on a flooded area in a field and started to display.


I kept checking the estuary-river as I drove past Cardurnock and Anthorn but there was nothing doing, so headed home .
Sunday I headed for Geltsdale in the hope of Ring Ouzel, but although I heard them a couple of times they were at a great distance and out of view, and the same with Cuckoo, this was the first one I have heard this year.
On my way home I stopped off to check out a shingle bed on the River Eden, and found Oystercatcher digging for worms on the far bank, and yet another Common Sandpiper on the shingle.

So all in all a fair amount of diesel consumed and very little to show for it.
Posted by Gordon at 12:29 No comments:

Had the usual walk by the flash this morning but nothing about apart from female Kestrel, then by 9 I was heading for Kendal as I needed to take my new lens back for a replacement, as the auto-focus isn't working as it should. unfortunately they didn't have a replacement in the shop so will have to have another trip down there on Friday to pic new one up.
In the afternoon I decided to have a walk round Thacka reserve and check if the Otter was out, but unfortunately it didn't make an appearance. At long last though the place was teeming with Swallows and a few House Martins.


It wasn't easy trying to get a photo, the wind was blowing me all over the place and very cold it was too, I also noticed that the House Martins seem to be flying faster than the Swallows.

Now these are the birds that are making everyone angry -------

there are quite a number of them at the moment, and they are gobbleing every young water bird they can get their greedy beaks on. Young Mallard, ditto- Coot, ditto Moorhen, and now it seems  the 2 Goslings have gone the same way as they are nowhere to be seen.