Last Thursday Mrs W and myself had a ride down to Martin Mere and was surprised to find how quiet it was , both as regards people and birds. Its the first time I've been in the Ron Barker hide to find only one other person in there. Apparently we had just missed 3 Wood Sandpiper  and also a Kingfisher, (storey of my life) However there was still about 15 Ruff showing well and 1 Snipe peeping out of some sedge. A small party of  Tree Sparrows was outside the Raines Observatory, and there was quite a number of Black-headed Gulls on the reserve. There was very little to focus the camera on apart from common stuff.
Posted by Gordon at 15:23 No comments:

Had a wander about on Mell Fell with my Daughter yesterday, really enjoyable, not many birds about a few Meadow Pipits, a Wren, and a Raven calling from some trees.

Things are on the change

Had a look in at the flood these last couple of days, John had found a juvenile Little Ring Plover and it was still there yesterday morning mixing in with the Lapwings, but then somthng spooked everything and when everthing settled again there was no sign of it. Then last night there was a female Tufted duck, not much you might think , but for the flood this is an event :-) .
Posted by Gordon at 11:15 No comments:

A walk round Leighton Moss

Yesterday I decided to go out of the county and into lancashire for a change of scenery and a few descent birds. The sun was shinning when I left Penrith, but just before I arrived at Leighton it threw a heavy shower and I thought I was going to have to sit it out in the car for a while, needn't have worried as the sun came out again and shone for the rest of the day.


I made my way to the marsh hides first, masses of water, what a contrast to my last visit when it was bone dry. Now too much water and apparently no food means there wasn't much about, the only thing of note a small flock of Shoveler. On my way back to the centre I had a look at Barrow-Scout, here there was a bit more activity with , Coot, Gadwall, Mute Swan, and 2 Little Grebe,
At the centre I had a look in at the feeding station and amongst the regulars there was a Willow Tit going back and forth to one of the feeders. Popped into Lillian's hide , nothing out of the norm there so made my way down to the causeway.

On my way down I called in at the dipping pond and found the above Dragonflies.
In the public hide on the causeway the main focus of interest was the small island in front of the hide, this held quite a number of Redshank and 13 Greenshank. A  nice surprise though was 2 Ruff, and occasionally the whole lot would take flight when the Great Black-backed Gulls called in to tend their young,( Juveniles really.) 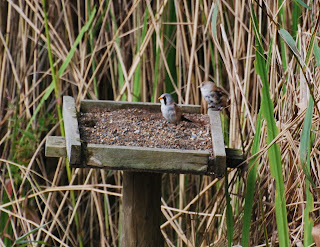 Back home in the evening I had a look at the flood no change there apart from about 50 or so Swallows some skimming the ground picking insects off. All in all a good day.
Posted by Gordon at 21:32 No comments:

Little happening at the flood

Very little happening on the flood

at the moment, we have a regular 100 or so Lapwings and fairly regular amount of Mallard usually around 20-30, and apart from a few Moorhens that's about it. The other morning I thought things had really taken a turn for the worst, because when I arrived at the flood there was nothing on at all.
Scanning round with the bins I soon found the reason, a Buzzard had just landed in the small tree on the edge of the flood and had cleared everything out. A Magpie flew into the tree to mob the Buzzard but had no effect and the Buzzard just sat there and ignored it. And sadly this is all the excitement there has been in weeks of patching.
I've had a few sorties into other parts of the lakes looking at various rivers and becks but nothing was found. I  need to get out of the county for a while, just to see some decent birds.
Posted by Gordon at 16:11 No comments:

Imagin my surprise (no scope needed)

The day started off like most days, breakfast, feed the Westies, and sort everything out to give them a walk and a spot of birding combined. So we pile into the car and make our way up to Thacka and the flood. Imagine my surprise, I'm still 200 yards away from the flood and my way is blocked by thousands of people. Getting out of the car I start asking people whats going on, most of them are incoherent and babbling about some huge bird that had landed on the flood. I'm thinking huge bird? Great White? Spoonbill? My mind is racing, and then suddenly I'm feeling a bit mift, why hadn't John text me or given me a bell?.
The crowd by now, I estimated to be getting on for maybe a thousand all jostling and pushing, one or two falling and in danger of being crushed.
I thought sod this, and so did something I don't normally do exercised my position and authority and produced my Thacka flood platinum pass. Immediately a pathway started to open up and I eventually got to the front of the crowd. Some people at the front where starting to cry saying "that's the last one they have all gone now " , what do you mean its the last one what are you talking about . Its just swallowed the last lapwing, 115 gone. I looked up to see what they were talking about, it was there no scope needed, it was huge, and the last Lapwing was just sliding down its throat. Then suddenly it lifted its wings, and the crowd (now well over 1001 ) gasped as one, thinking they could be next in line, the pudding after the main course. then it lifted into the air showering the throng with mud and water, and after circling round twice it left heading over the M6 and west in the direction of Orlando!!. 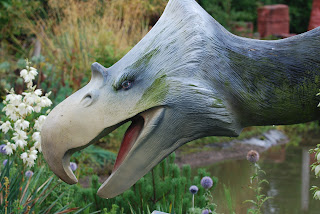 This is what happens when nothing changes on the patch for days, the rot sets in and it effects the mind. Seriously there has been very little change for days now, the usual 100 or so Lapwings and about 40 Mallard. The odd one or two gulls drop in or a couple of Oystercatchers , and that's about it, oh a Great Spotted Woodpecker flew over yesterday morning.
Last night my Daughter and I had a ride over to Tewet tarn (near castlerigg stone circle) in the past I have had various sighting around the area , nothing last night apart from a Snipe lifting from under my feet by the track.
The  sunsets were good and the Westies enjoyed another outing. 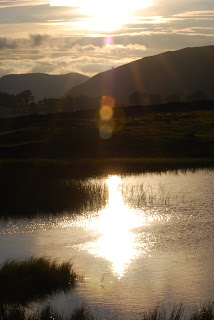 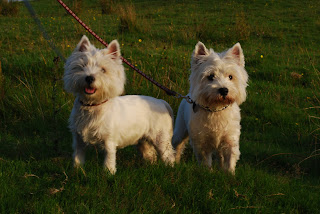 Morning visit to the flood

This Post should have gone out on Sunday but only did so in part, lets give it another go, and hope the computer dosn't play up again.

So its Sunday morning the 1st of August and I had a look in at the flood, giving the Westies a walk round before starting to scope and here is what was kicking around. Mallard 32, Lapwing 112, Woodpigion 2, Carrion Crow 2, Stockdove 2, Black-headed Gull 1, House Martin 4, Pied Wagtail 1, and a few Swallows. Also the Moorhens are doing ok and well past the predation stage.
Lat afternoon I payed a further visit, little change apart from a build up of Black-headed Gulls of various ages, and also quite a few juvinile Pied Wagtails.
I also had a walk round Cliburn Moss around the mid day period, a bit quiet on the bird fron apart from a couple of Great spotted Woodpeckers, and 2 Red-legged Partridge sat on a drystone wall. The sun got really warm at one point so the flower meadow had a good selection of butterflies.