A rare sight these days but we came across this Red Squirrel near Grange in Borrowdale. When I say we, I was accompanied by Mrs W and the daughter fresh home from Oxford uni having finished her 3 year sentence, and now signed up to join the ranks of the unwashed ,unemployed, spongers.
So yes we are in Borrowdale home to my favourite lake in my favourite valley, and where I lived for 8 years of my life in a house practically on the shore at Derwent Bay which belonged to the Lingholm estate.

At one period while I lived there I had 7 different Red Squirrels coming to my feeder at the kitchen window. each one had a mark to distinguish it from the others. And one day from a window I saw 2 Hawfinches hopping about not far from the front door. The wild life was unbelievable, all the usual mammals, then the Roe deer seen all the time, Badgers and Fox.
I called in to see my mate at Faw Park which is the next estate to Lingholm, near Portinscale and in a week He had shot 3 Greys ,  they are doing a tremendous amount of damage in the fruit and veg garden. They see very few Reds these days, and they use to get loads.

Back to the river walk, also these others pics below. 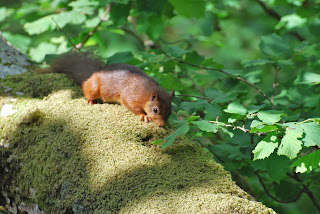 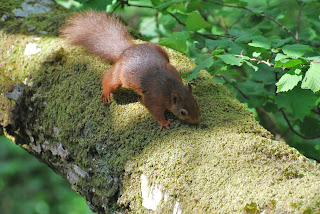 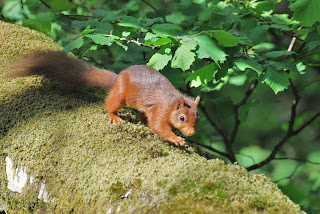 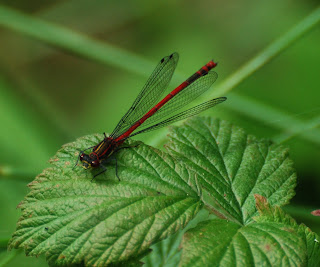 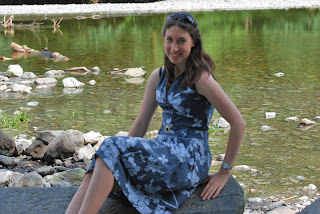 And Demoiselle. (My Daughter)
Posted by Gordon at 12:31 No comments:

Mrs W and myself had a ride over to Maryport today and had a walk along the coastal area and a small area of beach. 2 pair of Ring plover both pair behaving as if they had a nest close by. Also a few Oystercatchers feeding in various areas. By the harbour there was a Rock Pipit feeding young After making sure Mrs W's stomach had been satisfied , we moved on to Siddick pond. On the small pond, pair of Mute Swans with 5 young, and also a few Mallard. Moving on to the main pond , a count of 8 Heron, Mallard again of all ages, 2 Sedge Warblers, 1 Wren, a few Coot and another pair of Mute Swans with young but not showing well. 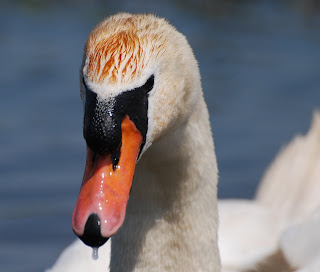 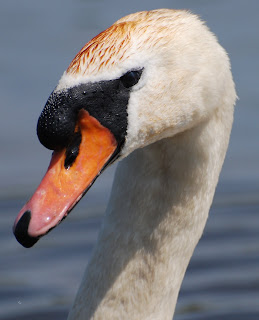 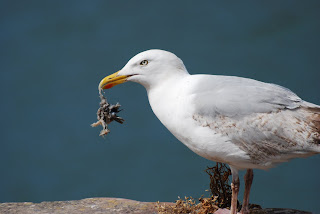 From a distance we watched this Herring Gull fighting on with this morsel of food and couldn't make out what it was. On closer inspection it turned out to be the remains of a crab.
Posted by Gordon at 19:47 No comments:

Made my way up to Thacka and the flood this morning taking Misty & Kyfer with me. It was nice to see John was already there scanning the flood, but had nothing unusual to report. The 2 Moorhen chicks are maturing well, but its worrying to see all the young mallard scattered all over the flood and I fear some have already been predated by the Black-backs. At a distance on one of the pylons there was a Buzzard and a second one circling above it.
On heavily vegetated ground close to the M6 John picked up first 1 Sedge Warbler then another two, these were closely followed by 2 Whitethroats on fencing bordering the M6 I don't think I would have found them if John hadn't have been there, Thanks for that John. 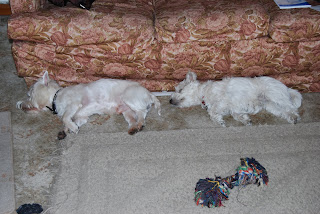 The Westies enjoyed their run about and didn't stray too far when I was engrossed in birding. They don't like the heat though and once back home they have a good drink then collapse.
Posted by Gordon at 11:21 No comments:

Mud Mud not so glorious 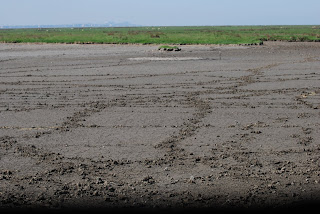 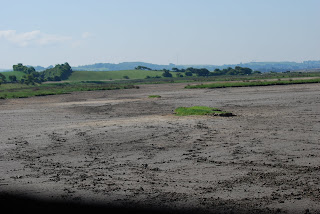 Started the day off by taking the dogs out, going up to the flood. 2 Moorhen chicks doing really well now, one Mallard left with 1 young out of 3, but then another appeared with 9 hatchlings. Lapwings are beginning to come back to the flood with about a dozen this morning.
Back home I dropped the dogs off and headed South for Leighton Moss, on arrival I went straight to the marsh hides, and couldn't believe my eyes, everywhere was a sea of mud. So if anyone is thinking of going to the marsh hides don't bother.
I quickly headed back to the centre where at the Grizedale hide there was masses of Blacktail Godwits, two Little Egrets, all the usual water birds that is normally on show, plus this Red Deer hind. 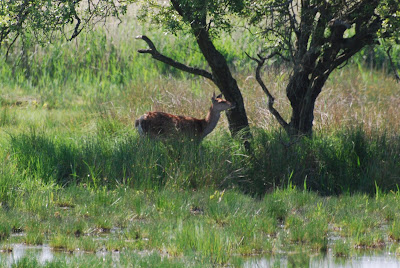 From the Public hide on the causeway the Marsh Harriers were showing well , with 4 in the air at once. It helps when the weather is good as it was today. 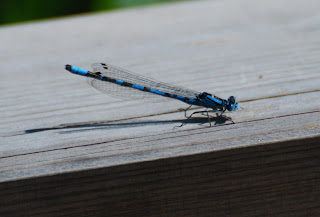 &  Blue-Tail Damselfly
Blue Damselfly
Both found at the dipping pond .
Posted by Gordon at 18:59 No comments:

Up early yesterday morning, and shock of shocks I was up at the flood by 7 giving the Westies an early morning walk and a spot of birding.
Not a great deal about, I could only find 2 of the moorhen chicks, and no sign of the young Mallard. A pair of Stock Dove, 2 Oystercatchers, House Martins and Swallows dipping over the flood and that was about it.
I came back home to leave the dogs and set off again this time heading for the river Pettril. Still in the Thacka area 6 more House Martins flying over the muck- heap and same amount in House Sparrows near the cottages. At Thacka farm more House Sparrows and a small flock of about 50 Starlings.Up by the motorway 1 Blackcap, didn't stay still long enough for a pic. A little further on I was taking a pic of a butterfly when this Assassin fly caught my eye. 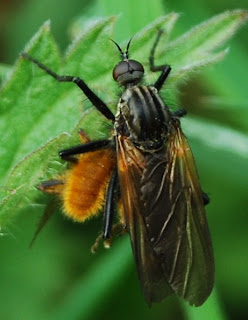 They prey on other insects, stick their proboscis deep into their prey and suck them dry, even feeding on the wing which is what this one was doing, bit like having a smoothie while on the go.
Eventually I reached the river and imagine my surprise when , on reaching the first wooden foot bridge I am confronted by this sign. 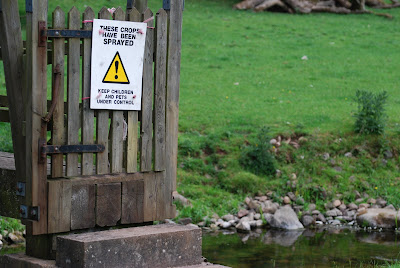 At first I was a bit puzzled, I'm thinking what crops, the whole area is grazing land . Then on closer inspection I could see all the fields had been sprayed with herbicide as all the thistles were dieing and any other plant life that had been growing. And all this right beside a river, Runoff what Runoff, and all the time the environment people are talking about river pollution. Still on my hobby-horse the Round up boys have been out and about in Penrith, all pavements, and footpaths in parks have now got the scorched earth look. Not only is it bad for the environment but it looks bad, enough said.
No sign of Kingfisher or Dipper this morning (maybe read the sign and thought sod this) but soon after leaving the river a buzzard started mewing overhead.
Posted by Gordon at 13:31 No comments:

A walk with the Westies

Had a walk around Thacka this morning, fairly quiet really, a couple of Song Thrush singing in the light rain, and 2 Dunnocks in the hedge along the top track.
On the flood things were similar, the 3 Moorhen chicks are still going strong and getting quite tall, they look all legs at the moment. However it was a surprise to see a Mallard with three well developed young, where did they suddenly come from?. Also a lone Herring Gull , 3 Lapwing, could be more out of sight as the vegetation is getting quite long now. there was quite a few male Mallard chilling out on the mud.
After the heavy rain of the last couple of days (some places in Penrith had to be pumped out) I was expecting the flood to be high again , but there didn't seem to be much difference.
Everywhere is looking very fresh and beautiful , the Hawthorn is in full bloom and the scent of it makes the years roll back, and I find myself reminiscing about childhood days. They say we only remember the good times and maybe its true to some extent. As a kid though the sun always seem to be shinning and only paused for the occasional thunderstorm, and we use to playing out till it went dark , some times later, then you came in had a saany (sandwich) and a mug of drinking chocolate and went to bed. What, wash your hands, whats the point ? they'll only get dirty again tomorrow. 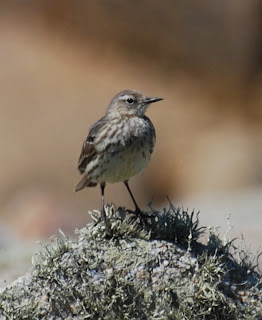 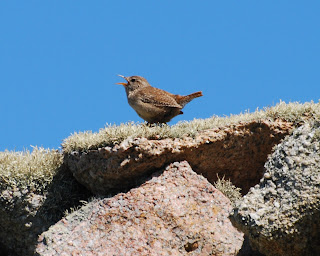 Well its back down to earth with a bang, and since I've been back I haven't seen much about. Been up onto the Beacon area with the Westies where the sound of Woodpigeons was deafening, and the only other thing of note was a Great Spotted Woodpecker. Back on the Patch ie. Thacka flood, well the Moorhens hatch three chicks while I was away and so far they haven't been predated, but talking to John up there this morning, and He has seen the Kestrel about again , and I'm thinking if it has young to feed somewhere then the Moorhen chicks could become food for their young.
The water level is dropping rapidly, so now plenty of mud showing, surely something good is going to drop in soon. Anyway here are some more pics from hols. until I find something interesting locally. 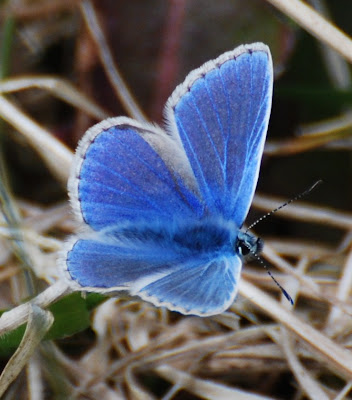 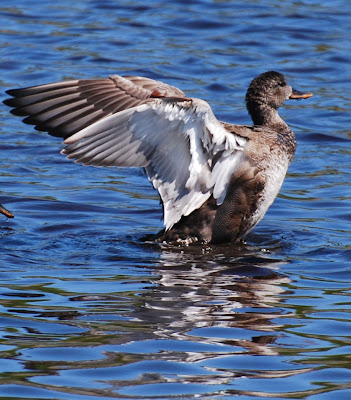 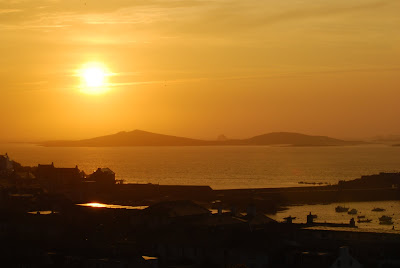 Sunset St Mary's harbour.
Posted by Gordon at 10:01 No comments:

A blaze of colour

My lasting memories of the Isles of Scilly will always be the terrific rocky coast line around the Isles, and the continuous blaze of colour where ever you went.
The colour of the sea in a multitude of sandy bays, the blossom on the trees and shrubs, but mostly the flowers, many from hot climate countries that have self seeded from collections in gardens and have now naturalized all over the Islands. Here is just a small sample of that colour, the Golden Pheasant were wondering around the gardens on Tresco, (no Petel Tresco not Tesco, this was better value for money) 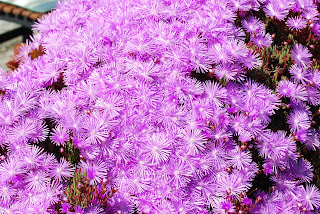 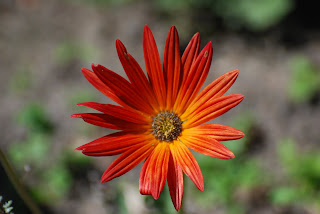 Some of the above were in the Abbey gardens Tresco, some growing wild, the list is too long to mention, but we found Freesia and Gladiolus growing wild  by the road side or coastal paths, obviously seeded from cultivation farms, but it was quite amazing to find them.