Solway Firth, the Cumbria side.

Over the Bank Holiday weekend my Daughter and I decided to have  a ride up to the Solway. Sunday dawned sunny and warm, so after a slow start to the day we finally set off, heading up the M6 turning off at Carlisle then making our way to the estuary road starting at Burgh by Sands and continuing along the road all the way to RSPB Campfield marsh. In  the photo below, looking across the Solway the hills of Dumfries & Galloway Southern Scotland. can be seen through a drizzly haze.

We were on the wrong side of the tide, it being well out, which meant virtually all the waders etc where well out on the massive expanse of sand, and even the big lens couldn't bring them close. 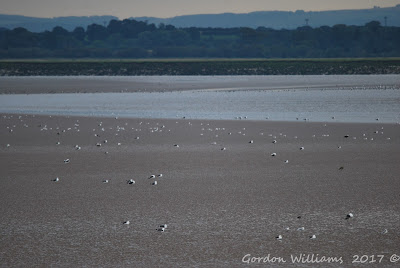 With the bins there was a good variety of birds, in one area quite a raft of Golden Plover , also one or two Lapwing, Curlew where dotted around and mixed in with the other waders. 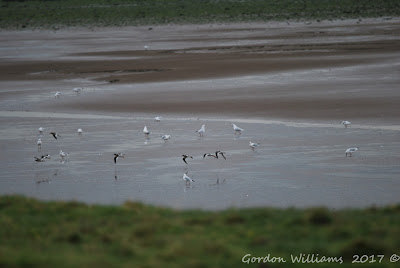 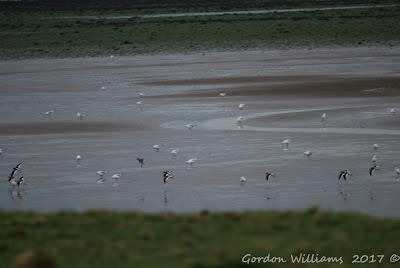 A small flock of Oystercatchers where on the wing,  and the was a  good amount  of gulls , which consisted mainly of Black-headed Gulls and Lesser Black-backed. 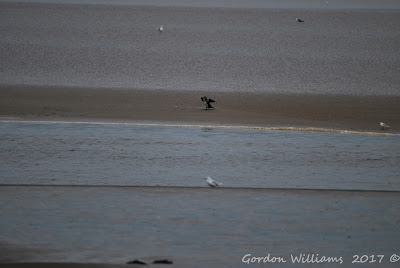 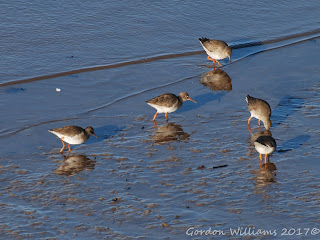 The only waders the lens could pull in was a few Redshanks.

The weather started to change as we pulled into North Plain farm where the RSPB have a small visitor centre and is right next to the marsh. Alas there was very little to be seen, a couple of days back there had been 26 Little Egrets, another move North for this species, and with so many about , they must be roosting close by. Close to the centre a field had been planted with various types of seed, and one or two linnets and Gold finches were seen flitting in and out, but to fast for the lens.
By 2pm the weather has turned nasty so it was decided we should head home.

Walking round the reserve and Thacka there wasn't a great deal in the way of wildlife, the usual ducks and gulls on the large pond, and the odd Moorhen trying to keep a low profile rather than swim in open water and become lunch for the gulls.


Quite a bit of colour in the area in the way of berries, with good crops of Mountain ash or Rowan both names can apply the botanical name is Sorbus, and also Hawthorn (Crataegus) so there shouldn't be any shortage of food for the birds this coming Autumn/winter.


There is a surfaced bridal way that borders the North East corner of the reserve , and can be followed all the way to Newton Rigg collage and passes under the M6 motorway. For most part it is bordered by horse paddocks,and at one point there is a gravelled drive leads off to some horse stables. Part way along this drive I could see a tree loaded with fruit, on closer inspection they turned out to be Plums, and again a very good crop, how they came to be planted where they are is a mystery.

The reserve and Thacka, Penrith, Cumbria.

Sun cracking the flags again this morning , and very warm, ideal butterfly weather if not birds. However it turned out not to be much good on both fronts, as regards birds , I missed the best photo opportunity when amazingly a Buzzard flew over and I only had my small lens on the camera, and I say  amazingly, because if we see a Buzzard in this part of Cunbria these days it is amazing, simply because they are being shot or poisoned out of existence, all in the name of protecting the shooting estates. 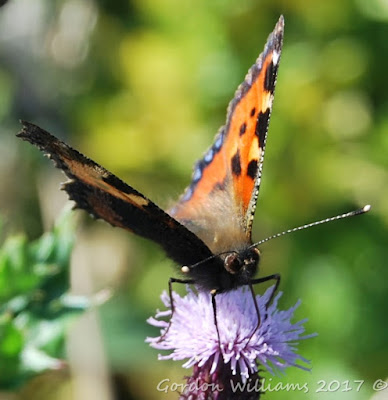 On the butterfly front the best that could be found was these Small  Tortoiseshell there was a few Large Whites on the wing but nothing else, in spite of the weather conditions being very good for them. I've heard other people comment on the lack of sightings too, something seems to be going wrong, maybe the weather was too wet earlier in the year. 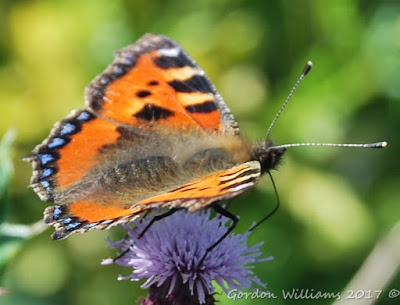 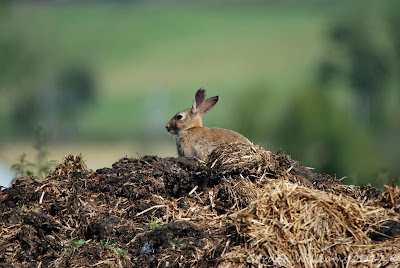 They where enjoying the sun and didn't seem to mind the smell. 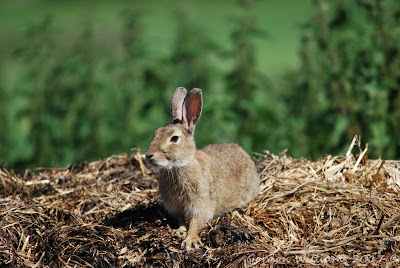 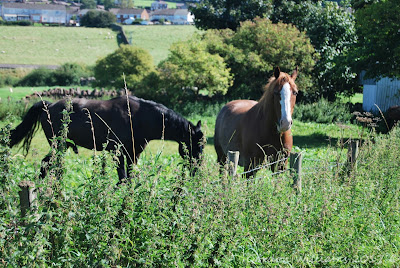 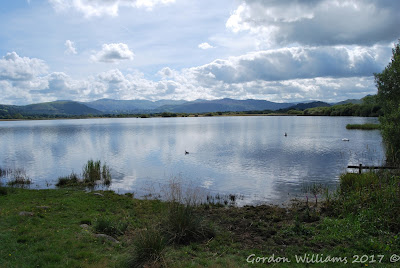 First stop Bassenthwaite Lake , the photos I've taken are looking SE  or E.
Its the only body of water in the Lake District to have lake in its name, all the others are water as in Derwentwater, or mere as in Windermere, or tarn as in Styhead Tarn, and so on. In the above photo the Helvellyn range of mountains are in the far distance. 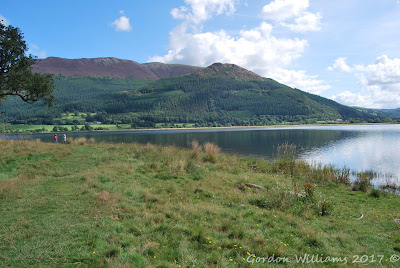 looking East and the lower slopes of Dodd and the higher Skiddaw come into view, looking in this direction I was lucky enough with the aide of binoculars to find one of the Hen Harriers quartering the sedge and grass of the far side of the lake.
Bassenthwaite lake out of interest, is approx 4 miles long and 3/4 of a mile wide and about 70 feet deep at its deepest, so a relatively shallow lake. at the Northern end of the lake there is a boat club, so a good portion of the lake is used for yachting, but a large portion of the Southern end is a nature reserve, including a large area of marsh and a small area of reed bed. 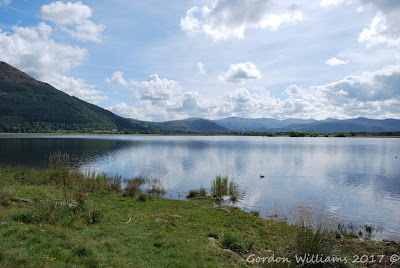 Continuous scanning of the lake didn't throw up much else, a few Mallard close in and a pair of Swans , which can just about be seen in the first photo, we did find at a great distance a large raft of juvenile Goosanders chasing shoals of fry, quite comical to watch as they would all dive on mass. The only other thing of note was a Great-crested grebe also at a distance. As regards the Ospreys, no sign , the female will have left now on her journey down to Africa, the three young are still here and the adult male. also amazing two strangers dropped in during the past week and fed the young Ospreys, one of them originated from a nest over at Kelder, and now has a mate but no nest as yet.


Next we moved on to Silver Meadows, and again nothing of note to mention, only saw one other person walking round.


This plant is not a native to the UK and is very invasive, doing a lot of damage to rivers and streams , choking them with its summer growth and as a consequence also killing various forms of wild life. It has also spread through Europe , Canada, New Zealand, and the USA.

As we scanned the reserve we saw a pair of Swallows hunting insects, and this was the reason why. 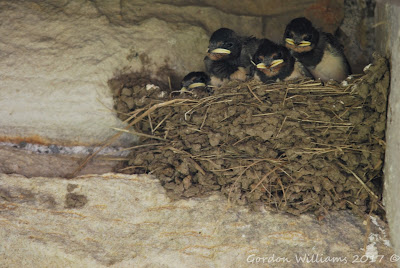 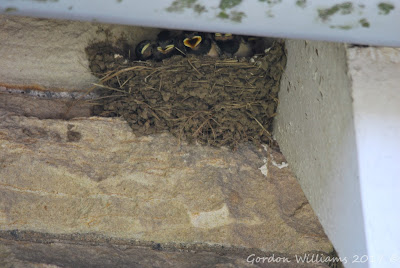 More than likely a second brood.
Posted by Gordon at 11:57 19 comments:

Penrith has entered Britain in bloom competition this year, so the town has made an effort to put on a bit of a show. However from what I have seen in other places, they are up against very  good and seasoned competition. 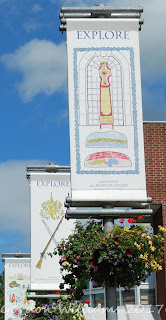 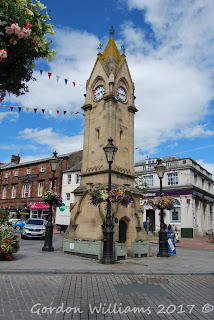 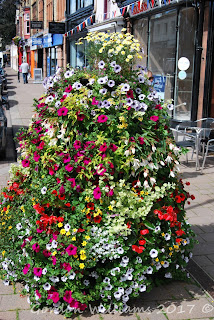 Sunny weather for a change as we have had  rain most days at some point, and I just knew under such conditions there would be very little about. so with a certain amount of optimism I set forth. There had been reports of a new species record for the reserve in the way of a Reed warbler, apparently good views were had for the couple of days it stayed.
Also before I go on , Great and exciting news has emerged, for the first time in over a hundred years a pair of Marsh Harriers have nested in Cumbria  and have successfully fledged two young at Bassenthwaite Lake.
So with the sun  shining expectations were reasonably high if not for birds then maybe butterflies, not so. 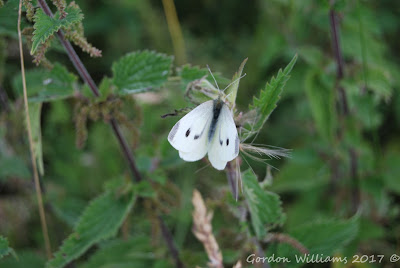 The Large white being the only butterfly to be seen anywhere on the reserve, and there are plenty of wild flowers, so can't explain why there was no sign of any.